Posted by koepnil on Monday, September 13, 2021 in Uncategorized. 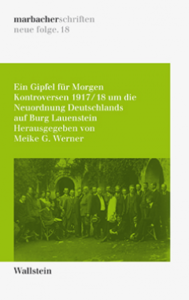 In the Spring of 1917, the German publisher Eugen Diederichs initiated two conferences at the Lauenstein Castle, the first took place from May 29 to May 31, 1917, and second a few months later, from September 29 to October 3. The list of invitees reads like a who is who of Germany’s public intellectuals. Among the more than 70 university professors, artists, writers, politicians, journalists, and reformers, we find the sociologists Max Weber, Otto Neurath, Ferdinand Tönnies and Werner Sombart; the writers Richard Dehmel and Ernst Toller; the feminist activist Gertrud Bäumer; the journalists Theodor Heuss and Joseph Joos; and the well-known pedagogical reformers Bernhard Hell and Gustav Wyneken. In the final phase of War, after US entry and the February Revolution in Russia, domestic opposition to the war in Germany was on the rise, and it is in this context that the famous meetings on the Lauenstein occurred. The convener, Eugen Diederichs, hoped that the conferences would present the world with an example of open and progressive German thinking centered on culture, not power. Yet heated debates, especially between Max Weber and Max Maurenbrecher, revealed the loss of political and cultural consensus among Germany’s intellectuals and elites. A milestone of modern intellectual history, the Lauenstein conferences nevertheless rehearsed positions that would emerge in what E. J. Hobsbawm called the “Age of Extremes.”