Vivian completed her Bachelor’s degree in German philology with a minor in Latin philology at the University of Rostock, Germany. Her bachelor thesis explores the phenomenon of German weil-clauses with verb second in contemporary German. She has two Master’s degrees from the University of Georgia. For her first Master’s degree, Vivian concentrated in German literature and wrote her master thesis about Amazonenlieder, a collection of poems from 1762 featuring a female warrior. For her second Master’s degree in Comparative Literature, Vivian wrote her master thesis about cross-dressing women in the eighteenth century. She joined the German Ph.D. program at Vanderbilt University in the fall of 2018.

Vivian’s research interests include German, English, and Latin poetry, German literature of the 18th, 20th, and 21st century, and literature in its historical context. She is also interested in second language acquisition. 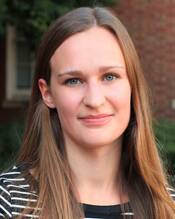