I am Professor of Cinema & Media Arts and English as well as a member of the graduate faculty in German Studies. My research and teaching are broadly concerned with transatlantic film and media theory, environmental criticism, including critical Anthropocene studies, and the relationship between aesthetics and politics.

These interests are front and center in my most recent book Inhospitable World: Cinema in the Time of the Anthropocene (2018, Oxford University Press). In this study, I turn to the history and theory of film to consider how it reflects upon the creation and destruction of human environments and livable worlds. Specifically, this book focuses on examples offilm production in which unnatural weather and deadly environments are produced for entertainment, scientific study, and devising military strategy. Film-making stages, quite literally, the process by which worlds and weather come into being and meaning, and it mimics the forces that are driving this new planetary inhospitality. From Buster Keaton’s weather designs to the Nevada atomic testing range and from China’s Three Gorges Dam to the icy shores of Antarctica, the chapters in this book explore the connection between media theory and aesthetics, on one hand, and the production of artificial worlds, weather, and climates, on the other, in which hospitality and survival in the world are at stake. I argue that cinema exemplifies the philosophical, political, and perhaps even logistical processes by which we can perceive our environmental predicament and begin to imagine a minimal hospitality that may emerge on a post-hospitable planet. Film Quarterly published an interview with me about this book and extended reviews were published in L.A. Review of Books and the Hong Kong Review of Books.

Inhospitable World builds on my previous work concerning globalization and politics: a co-authored book (with Justus Nieland) Film Noir: Hard-Boiled Modernity and the Cultures of Globalization and my first monograph Theaters of Occupation: Hollywood and the Re-education of Postwar Germany.  While I continue to write and think about the Anthropocene, a new line of inquiry focuses on sincerity and media theory, a project that has its origins in a graduate seminar I taught in the Spring of 2016 (Sincerity and the Media of Appearance).  As a first foray, I have written an essay “Must We Mean What We Film?: Stanley Cavell’s Candid Camera.” This will be my contribution to a special issue of Discourse entitled “Cinema, Modernism, and the Perplexing Methods of Stanley Cavell” that I am co-editing with Daniel Morgan.  I am also working on the connections between Hannah Arendt’s account of thinking as it relates to cinema and Cavell’s exploration of thought on film.

Apart from this research, I co-edit the Contemporary Film Directors series for University of Illinois Press, and coordinate with colleagues in CMA and German the Film Theory and Visual Culture Seminar at Vanderbilt’s Robert Penn Warren Center for the Humanities. I have directed the Program in Cinema & Media Arts at Vanderbilt since 2011 and served on the Board of Directors at Belcourt Theatre from 2012-2018.

My research and teaching are broadly concerned with transatlantic film and media theory, environmental criticism, including critical Anthropocene studies, and the relationship between film aesthetics and politics. 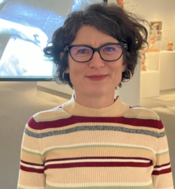