Courtney Rehkamp entered the German PhD program at Vanderbilt in August 2019. She received her BA from Northern Kentucky University in German and Education. Most recently she comes from the University of Cincinnati, where she completed a Master’s degree in German Languages and Literature with a certificate in Film and Media studies. During her Master’s program she spent a year at Eberhard Karls Universität Tübingen. Her current research interests are broad and include literature, film studies, media studies and how the human body and medicine are expressed in works of literature and film. She is also interested in pedagogy and second language acquisition. 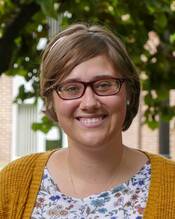