Celia Applegate studies the culture, society, and politics of modern Germany, with particular interest in the history of music, nationalism and national identity. She is the author of A Nation of Provincials: The German Idea of Heimat (Berkeley, 1990), the co-editor (with musicologist Pamela Potter) of Music and German National Identity (Chicago, 2000), and the author of Bach in Berlin: Nation and Culture in Mendelssohn’s Revival of the St. Matthew Passion (Cornell, 2005), winner of the DAAD/GSA Book Prize. She is currently working on comprehensive interpretation of musical life in Germany from the 17th century to the present, titled Music and the Germans: A History. She is Past President of the German Studies Association and Vice President of the Central European History Society.

She teaches courses on modern German politics and culture, the history of the Holocaust, of European thought, and of European nationalism and ethnic conflicts. 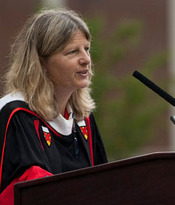