Charlotte Pierce-Baker, Ph.D. was born in Washington, D.C. and raised in D.C. and Ahoskie, North Carolina.  She received her B.A. in English from Howard University and the Master’s degree in Speech Sciences from Ohio State University.  In 1985 at Temple University, she was awarded the Ph.D. in Speech Pathology and Applied Linguistics.  Her Ph.D. thesis on African American children acquiring the phonology of a first language was honored with a dissertation prize for “outstanding scholarship and service in the university and community.”

English and as Assistant Dean in the Master of Liberal Arts Program (MLA).   As a part of the College of General Studies at Penn, she created an academic curriculum program, Innovative Study and Teaching in the Humanities (ISTAH); the program was design to foster literary and pedagogical connections between university professors and high school teachers. Professor Pierce-Baker was Visiting Assistant Professor of English at the University of Delaware in Spring 1998 and Visiting

Assistant Professor at Duke University in Women’s Studies and English in 1998-1999.  In Fall 1999, she became permanent faculty at Duke:  Associate Research Professor.  In 2004, Duke promoted her to Full Research Professor in Women’s Studies and English. Professor Pierce-Baker has published essays and commentary on literature and pedagogy in a variety of journals and the Women’s Studies Program.  Her teaching continues in the areas of:  Contemporary African American Women Writers;Applied Linguistics; Socio-linguistics, and newly designed courses in the area of Gender, Trauma and Violence.  Three of her new courses at Duke became popular in the undergraduate curriculum offerings: Feminisms in Black and White, Black Language and Culture in the United States, and Women Writing Trauma. and periodicals.  She has been an active volunteer with victim-survivor services at Women Organized Against Rape (WOAR) in Philadelphia.  While at Duke University, she participated in activities of the Women’s Center and served as liaison between the Center

Since the publication of her book, Surviving the Silence:  Black Women’s Stories of Rape (W.W. Norton, September 1998), Professor Pierce-Baker has continued to travel and lecture on issues of black women and sexual assault.  She has taken the topic of rape into the classroom with her course on women and trauma.  Finding and creating a language is, for her, the first step in acknowledging and documenting the “colonization of the body of woman.”  Her book, the first of its kind, provides a forum for the heretofore-muted voices of African American women surviving the trauma of rape. Professor Pierce-Baker has been honored for her book, her dedication, and her work in the classroom:  The Rainbow Sisters Project – a feminist, multi-racial advocacy organization based in Los Angeles, presented her with a “Voice Award” in 1998.  The Women’s Centers at Duke and at Vanderbilt University honored her with the “Vagina Warrior Award” for her activist work and celebration of women.

In 2011, Pierce-Baker was invited to serve on the Board of Directors of the Mark West Mental Health Foundation/Skyland Trail in Atlanta Georgia.

Her recent book, This Fragile Life:  A Mother’s Story of a Bipolar Son breaks another family silence of mental illness.  Lawrence Hill Books is the publisher.  The release date is June 1, 2012.

Pierce-Baker resides in Nashville, Tennessee with her husband, Houston Baker, who also is on faculty at Vanderbilt 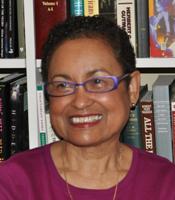