Carlos Alonso Nugent is a literary, cultural, and environmental historian of the U.S.-Mexico borderlands—and, more broadly, the Americas. He comes to Vanderbilt from Stanford, where he participated in the Mellon Fellowship of Scholars in the Humanities, and from Yale, where he earned a Ph.D. in English and a Graduate Certificate in Environmental Humanities.

Nugent is currently completing a book called Imagined Environments: Mediating Race and Nature in the U.S.-Mexico Borderlands. With a multiethnic and multilingual approach to literary studies, the book reads novelists like Willa Cather, essayists like Fabiola Cabeza de Baca, and activists like César Chávez. Meanwhile, with methods from media studies, it examines promoters who encouraged whites to claim homesteads, periodistas who emboldened Latinxs to protect pueblos, and leaders who helped Natives fight for sovereignty. By following these figures through the borderlands, the book reconstructs a range of “imagined environments”—Nugent’s term for the frameworks through which human groups have represented, related to, and resided in their more-than-human worlds. While many of these imagined environments have come to seem normal and natural, Nugent shows how they have functioned as sites of relational racialization—how they have linked whiteness to water infrastructure, or how they have associated Latinidad with communal land tenure. Through these interventions in critical race and ethnic studies, he charts a new course for the environmental humanities. Like many ecocritics, he explains how texts, images, and other media have fueled environmental activism—how they have helped us love places we have never been and care for creatures we have never met. At the same time, though, he argues that these media have entrenched “environmental unconsciousness”—that they have allowed us to disguise (or disregard) our use (and abuse) of the planet.

While finishing his first book, Nugent is starting a second that is tentatively titled Nuestra América: A Hemispheric History of Environmental Awareness and Activism. Although many scholars have celebrated Natives, Latinxs, and Blacks who have fought against environmental inequalities, they have all too often defined these environmental justice activists as inheritors to—or imitators of—white environmentalists. Revising these accounts, Nuestra América traces a tradition of “Latinx ecomedia” past 20th-century environmentalism, past 18th- and 19th-century Romanticism, and all the way to 16th- and 17th-century colonialism. Casting new light on conflicts and commonalities that cut across the Spanish Empire and the Indigenous Americas, the book locates Latinx ecomedia at the very heart of the lands and waters currently claimed by the U.S. In the end, the book shows how Latinx ecomedia have exceeded both environmentalism and environmental justice—and how they can help us cope with fires in the Amazon, storms in the Caribbean, and crises across two continents.

For Imagined Environments, Nuestra América, and his other research, Nugent has received American Literature’s Norman Foerster Prize (2020), the Johannes Gutenberg University’s Obama Dissertation Prize (2020), the Yale English Department’s Best Dissertation Prize (2020), and an Association for the Study of Literature and Environment Graduate Student Paper Award (2019). In addition, he has held fellowships at the Beinecke Rare Book and Manuscript Library and the Yale Center for the Study of Race, Indigeneity, and Transnational Migration.

Carlos’s research informs his teaching in U.S. literary and cultural studies, Latinx literary and cultural studies, critical race and ethnic studies, and the environmental humanities. In his courses, students wrestle with the differences that divide and define our planet: thus, in his seminar on “Latinx Cultural Politics,” they read Gloria Anzaldúa’s Borderlands/La Frontera alongside an ICE officer’s oral history. Just as importantly, students track these differences across space and over time; therefore, in his introduction to “Literature and the Environment,” they use the “Economy” chapter of Walden to contrast an Ancient Greek word—oikonomia, or “household management”—and a contemporary capitalist concept. Whether they conduct research in the library stacks or on digitized Latinx newspapers, Carlos’s students come to understand our inequitable yet intertwined pasts. However, they also imagine new futures: in his seminar “Colonizing and Decolonizing North American Environments,” they use 16th- and 17th-century exploration media as inspiration for their own hand-made maps.

Before beginning his academic career, Nugent taught at a high school in New York City and an elementary school in Meco, Spain. He grew up in Tucson, Arizona.

“Latinx Literature in the Anthropocene,” ISLE: Interdisciplinary Studies in Literature and Environment 27.3 (Summer 2020).

“Modernist Institutions, Modern Infrastructures, and the Making of the U.S.–Mexico Borderlands,” Modernism/Modernity Print Plus 5.2 (Fall 2020). 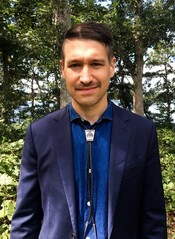