Joanna Huh is a fifth-year Ph.D. candidate in the Department of English at Vanderbilt University. 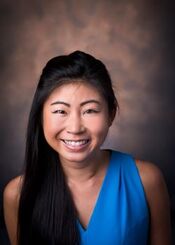