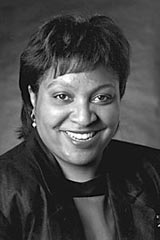 Yollette Trigg Jones is a native of Columbia, Tennessee. She earned the A.B., M.A., and Ph.D. degrees from Duke University, with concentrations in African American history and 20th century United States history. Dr. Jones has taught classes in both areas since coming to Vanderbilt in 1991. She has served in several areas of university administration, including the Arts and Science Deans Office and the Provosts Office. She is married to William T. Donnell, Sr.; they have two children, Bill Donnell Jr., and Paige Donnell.