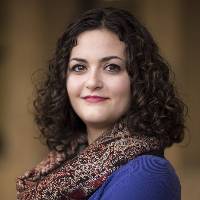 I specialize in Buddhism, with a focus on early South Asian Buddhism and American Buddhism. In my research and my teaching I am interested in the relationship between religion and the body and embodied identities, including race, gender, and sexuality.

My forthcoming book project uses the body as a framework for understanding early South Asian Buddhist ghost (Sanskrit preta) stories. I examine how portrayals of the non-human body of the Buddhist preta helped monks think about, and shape ideologies, about human bodies and embodied identities. I show that pretas were at the center of changing cosmological ideas in ancient India. Their stories reflect changes in ancestral rituals as well as the development of karma as a law of moral cause and effect.

My interest in embodiment extends to the modern period. My second research project examines Buddhism and race in North America. In this work I place black Buddhists within local and transnational discourses of religion, race, and empire. I argue that our understanding of the transmission of Buddhism to the West is incomplete without consideration of African American engagement with Asian religions.