Rick Smith  is a Postdoctoral Fellow in the William H. Neukom Institute for Computational Science and the Department of Anthropology at Dartmouth College. He is a biocultural anthropologist whose research focusses on the connections between power, inequality, knowledge production, and the body. Merging approaches from genetics, epigenetics, ancient DNA, and queer, feminist, and Indigenous science studies, Smith’s work maps the ways that the political becomes biological, and the biological becomes political.

The Genomic and Epigenomic Effects of Sociopolitical Change in the Americas 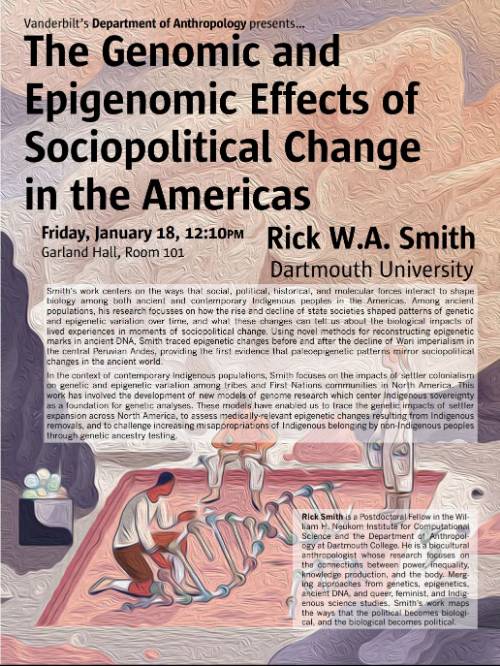 Smith’s work centers on the ways that social, political, historical, and molecular forces interact to shape biology among both ancient and contemporary Indigenous peoples in the Americas. Among ancient populations, his research focusses on how the rise and decline of state societies shaped patterns of genetic and epigenetic variation over time, and what these changes can tell us about the biological impacts of lived experiences in moments of sociopolitical change. Using novel methods for reconstructing epigenetic marks in ancient DNA, Smith traced epigenetic changes before and after the decline of Wari imperialism in the central Peruvian Andes, providing the first evidence that paleoepigenetic patterns mirror sociopolitical changes in the ancient world.

In the context of contemporary Indigenous populations, Smith focuses on the impacts of settler colonialism on genetic and epigenetic variation among tribes and First Nations communities in North America. This work has involved the development of new models of genome research which center Indigenous sovereignty as a foundation for genetic analyses. These models have enabled us to trace the genetic impacts of settler expansion across North America, to assess medically-relevant epigenetic changes resulting from Indigenous removals, and to challenge increasing misappropriations of Indigenous belonging by non-Indigenous peoples through genetic ancestry testing.

Photos from the visit