Archaeology's genocide problem: violence, heritage, and the techniques of forgetting on the Armenian highlands 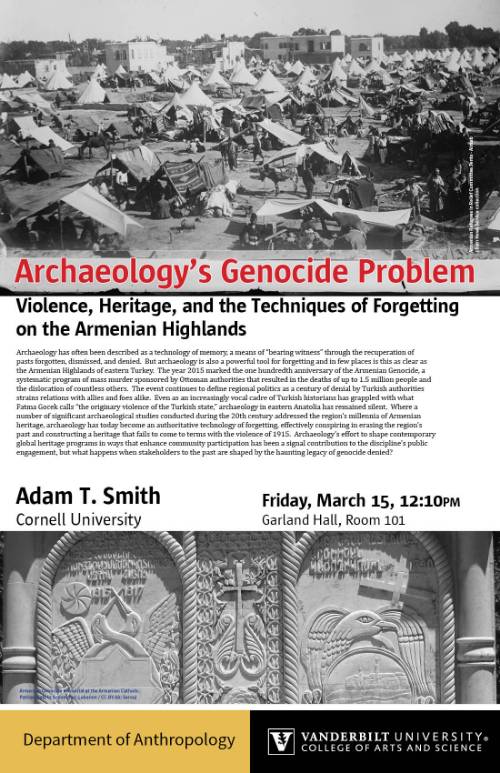 Archaeology has often been described as a technology of memory, a means of "bearing witness" through the recuperation of pasts forgotten, dismissed, and denied. But archaeology is also a powerful tool for forgetting and in few places is this as clear as the Armenian Highlands of eastern Turkey. The year 2015 marked the one hundredth anniversary of the Armenian Genocide, a systematic program of mass murder sponsored by Ottoman authorities that resulted in the deaths of up to 1.5 million people and the dislocation of countless others. The event continues to define regional politics as a century of denial by Turkish authorities strains relations with allies and foes alike. Even as an increasingly vocal cadre of Turkish historians has grappled with what Fatma Gocek calls "the originary violence of the Turkish state," archaeology in eastern Anatolia has remained silent. Where a number of significant archaeological studies conducted during the 20th century addressed the region's millennia of Armenian heritage, archaeology has today become an authoritative technology of forgetting, effectively conspiring in erasing the region's past and constructing a heritage that fails to come to terms with the violence of 1915. Archaeology's effort to shape contemporary global heritage programs in ways that enhance community participation has been a signal contribution to the discipline's public engagement, but what happens when stakeholders to the past are shaped by the haunting legacy of genocide denied?

Adam T. Smith (Ph.D., Anthropology, University of Arizona, 1996) is Goldwin Smith Professor of Anthropology at Cornell University.  He is currently also the Director of Graduate Studies for the Cornell Institute of Archaeology and Material Studies.  His research is focused on the Bronze Age South Caucasus.  Smith is a co-founder of the joint American-American Project for the Archaeology and Geography of Ancient Transcaucasian Societies (Project ArAGATS), a long-term collaborative research project conducting investigations in Armenia.  Smith is the author most recently of The Political Machine: Assembling Sovereignty in the Bronze Age Caucasus (Princeton 2015), as well as The Political Landscape: Constellations of Authority in Early Complex Polities (University of California 2003).

Photos from the visit